Blockchain: The Next Big Thing in Healthcare?

Do you ever feel frustrated when you go to a new doctor or visit a specialist and they ask you to fill out a new medical history form? Why don’t they already have your medical history on file? Doesn’t everyone have an electronic health record?

The answer is probably yes, you do have an electronic health record (EHR) or electronic medical record (EMR) somewhere. However, it is likely stored on a siloed database that is the exclusive domain of the medical practice or hospital where your primary care doctor is based. Interoperability is still mostly a dream when it comes to medical record sharing.

In fact, according to statistics from the Healthcare Information and Management Systems Society (HIMSS), 75% of hospitals have at least 10 disparate EHRs in place or in use by affiliated practices.

Adding to the inefficiency in medical information sharing is the illegal, but prevalent practice of EHR vendors and healthcare providers knowingly interfering with the electronic exchange of patient health information.

Is blockchain the answer?

Blockchain, the immutable distributed ledger made famous as the underlying technology behind Bitcoin and other cryptocurrencies, is poised to revolutionize the way we create, maintain and use personal health information. However, it’s going to need some help.

With blockchain, every entity (e.g., hospital, physician and specialist) that has permission to join the chain holds a local copy of the medical information. New entries or corrections to the medical record ‘block’ must be cryptographically authorized before it is permanently and irreversibly added to the chronologically growing blockchain that is the patient’s EHR.

This process of verifying and updating the blockchain database takes time as each peer in the network must independently verify each new block of data. In the case of Bitcoin, it can take up to 10 minutes to create each new block. The performance is faster for applications that do not involve cryptocurrency.

For blockchain technology to work and provide additional value, such as access to anonymized health data for research purposes, will require the power of a data warehouse. A secure, cloud-based SQL data warehouse such as Snowflake can provide the performance, scalability and HIPAA compliance needed to complement and enhance the special capabilities of blockchain architecture.

Blockchain has been heralded (i.e. hyped!) as a disruptive technology that will change our lives. This remains to be seen; however, blockchain architecture is already being explored and exploited by many different industries.

In healthcare, blockchain architecture may help realize the dream of a truly portable medical record system, accessible whenever and wherever it is needed by authorized users. The key benefits of blockchain technology—immutability, crypto controlled access, fraud prevention, secure data sharing among untrusted users—make it ideal for security-first applications like those used for medical records management.

One proposed system for managing personal health records is known as MedRec. The system provides a decentralized record management system based on blockchain technology that gives patients a comprehensive, immutable log and easy access to their medical information across providers and treatment sites.

The MedRec system is built on the Ethereum open-source, blockchain-based distributed computing platform. Ethereum, like all blockchain architectures, consists of a system of nodes (personal computers, clusters, virtual machines) in a decentralized network.

The Medrec method does not store EHRs directly on the Ethereum blockchain, instead it uses a relational set of smart contracts to encode pointers, which is used to locate and authenticate to record locations. MedRec defines three main kinds of smart contracts, within which there is some variation between contracts belonging to patients, providers and other types of users such as administrative personnel.

Smart contracts are not a replacement for contracts in the traditional sense, rather they are agreements to execute some action or code given a set of conditions. In the case of MedRec, these contracts can be used to encode a set of pointers to the locations of medical data.

Unfortunately, for blockchain applications intended for traditional business uses the original blockchain database system valued security above performance. This is not necessarily a bad thing, it is just different from the traditional database optimized to allow ‘create’, ‘read’, ‘update’ or ‘delete’ information.

In the case of MedRec or other systems designed to handle medical records, there would or could be hooks from the blockchain-based system to the actual medical records stored in a data warehouse on premises or a cloud-based service such as Snowflake. Each block of data in the blockchain has a corresponding and unique hash function that can be used to retrieve the correct data from Snowflake or any other database system.

In this way, it is possible to overcome the performance limitations of blockchain data handling by combining it with the power of the Snowflake SQL database engine. Snowflake also provides the built-in HIPAA compliance that all healthcare solutions require, including automatic data encryption and decryption.

A better future with blockchain

The current healthcare system is hampered at many levels by a lack of information system compatibility. It is also costly in terms of both healthcare administration and human interaction when patients and their doctors do not have access to the most up-to-date medical information.

Many believe that the blockchain architecture may offer an innovative new way to manage patient information by providing secure access to authorized providers and an unprecedented level of control (i.e., sense of agency) to patients as well.

It’s no wonder that a 2017 survey by Black Book Market Research found that 93% of managed care respondents, 70% of hospital respondents and 58% of physician practice respondents believe that blockchain technology shows promise in improving healthcare information interoperability. It may be years before we personally experience the impact, but the race has begun.

The post Blockchain: The Next Big Thing in Healthcare? appeared first on Snowflake. 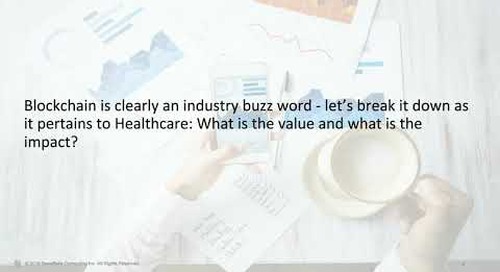 Webinar: Real-Talk on Healthcare Analytics: Is Blockchain the Next Big Thing?

Blockchain has been heralded by many as a disruptive technology that will change our lives. The blockchain ... 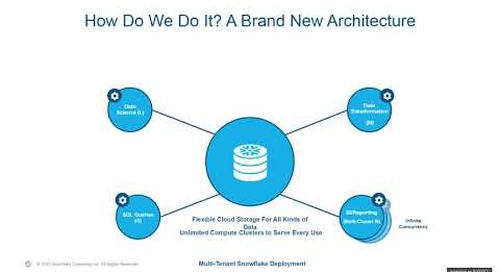 HIMSS Webinar: Why Healthcare Analytics Starts in the Cloud 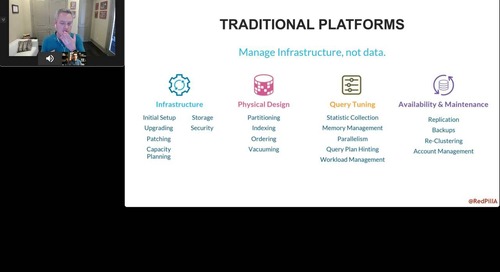 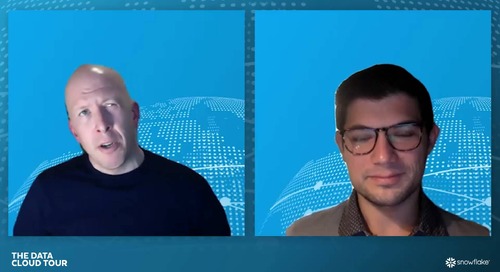 1:39:57
The Data Cloud Tour for Healthcare and Life Sciences - EMEA

Hear directly from Snowflake customer University Hospitals of Morecambe Bay NHS Foundation Trust as they share what a modern analytics stack for healthcare looks like, how the NHS in the UK has pivote 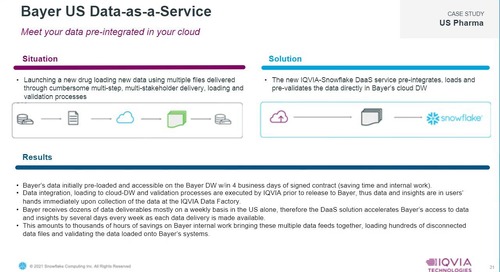 Bringing new drugs to market in an increasingly competitive and regulated market is more challenging than ever for pharmaceutical companies. Deciding how and where to focus your go-to-market efforts i 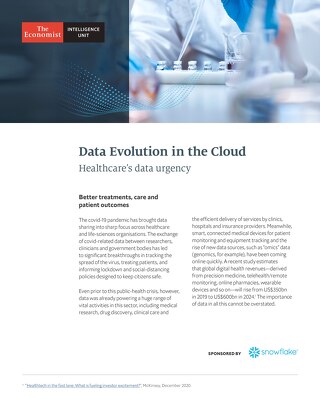 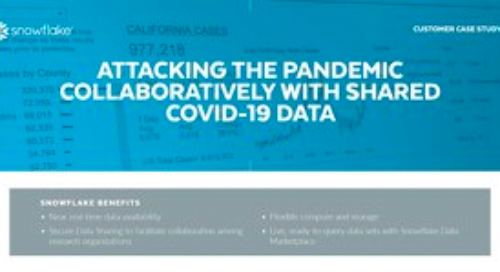 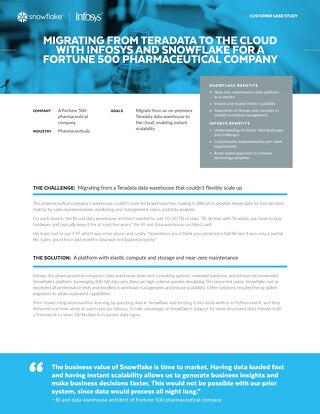 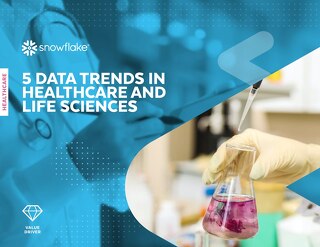 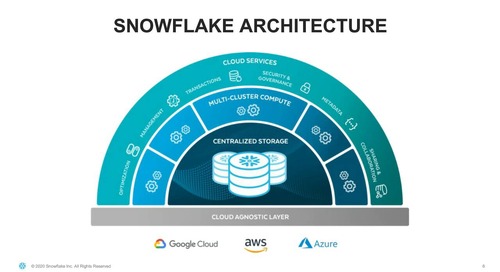 Healthcare organizations across the globe were forced to respond to COVID-19 by standing up Telehealth very quickly. Some had established Telehealth platforms while many others had to shift gears to s 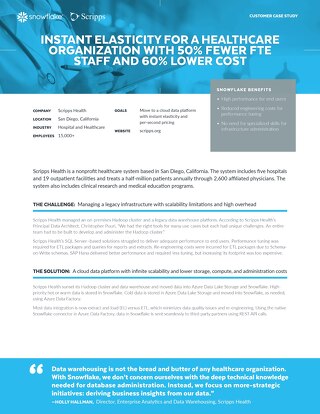 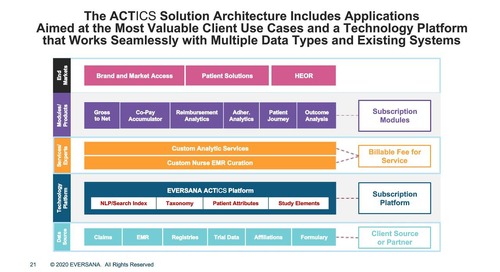 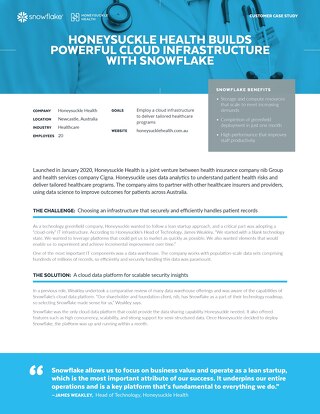 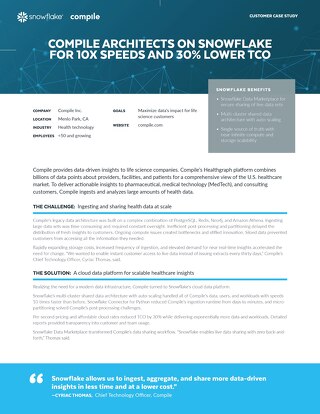 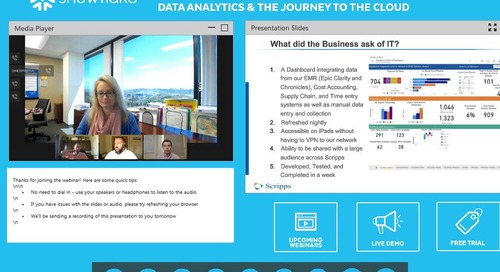 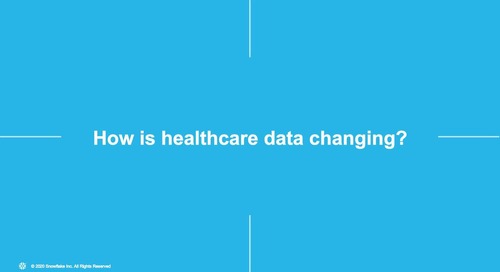 Data is paving the way for new approaches to care delivery, clinical diagnostics, medical innovation, and therapeutic development. But many healthcare and life sciences organizations still rely on rig 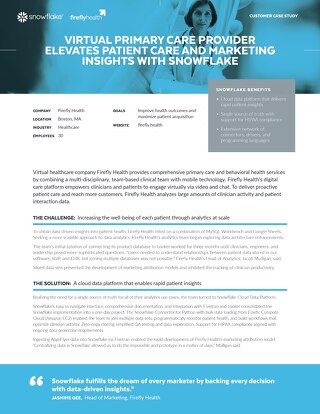 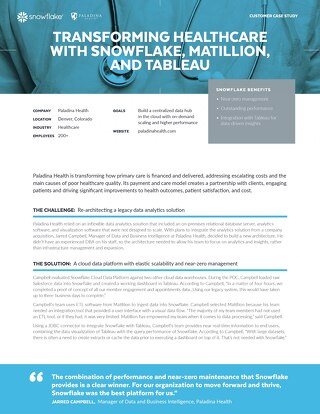 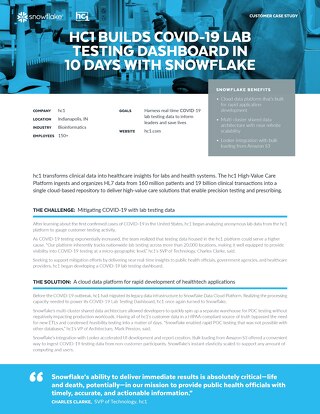 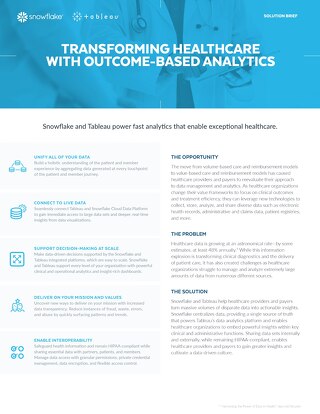 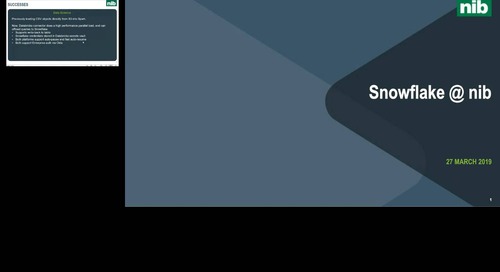 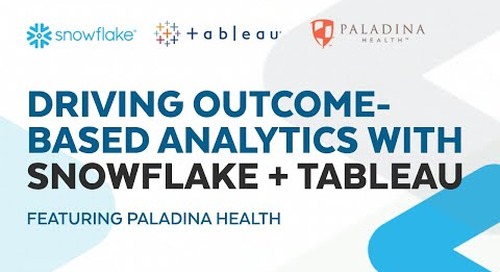 As more healthcare providers and payers transform how they serve patients and members, it’s vital to understand how a flexible cloud data management strategy and visual analytics platform can support